I have had many requests to explain the math behind the statistics in the article Roger Clemens and a Hypothesis Test. The math is usually handled by software packages, but in the interest of completeness I will explain the calculation in more detail.

A t-Test provides the probability of making a Type I error (getting it wrong). If you are familiar with Hypothesis testing, then you can skip the next section and go straight to t-Test hypothesis.

To perform a hypothesis test, we start with two mutually exclusive hypotheses. Here’s an example: when someone is accused of a crime, we put them on trial to determine their innocence or guilt. In this classic case, the two possibilities are the defendant is not guilty (innocent of the crime) or the defendant is guilty. This is classically written as…

Unfortunately, our justice systems are not perfect. At times, we let the guilty go free and put the innocent in jail. The conclusion drawn can be different from the truth, and in these cases we have made an error. The table below has all four possibilities. Note that the columns represent the “True State of Nature” and reflect if the person is truly innocent or guilty. The rows represent the conclusion drawn by the judge or jury.

A Type I (read “Type one”) error is when the person is truly innocent but the jury finds them guilty. A Type II (read “Type two”) error is when a person is truly guilty but the jury finds him/her innocent. Many people find the distinction between the types of errors as unnecessary at first; perhaps we should just label them both as errors and get on with it. However, the distinction between the two types is extremely important. When we commit a Type I error, we put an innocent person in jail. When we commit a Type II error we let a guilty person go free. Which error is worse? The generally accepted position of society is that a Type I Error or putting an innocent person in jail is far worse than a Type II error or letting a guilty person go free. In fact, in the United States our burden of proof in criminal cases is established as “Beyond reasonable doubt”.

Chances of Getting it Wrong (Probability of Type I Error)

The Greek letter µ (read “mu”) is used to describe the population average of a group of data. When the null hypothesis states µ1= µ2, it is a statistical way of stating that the averages of dataset 1 and dataset 2 are the same. The alternate hypothesis, µ1<> µ2, is that the averages of dataset 1 and 2 are different. When you do a formal hypothesis test, it is extremely useful to define this in plain language. For our application, dataset 1 is Roger Clemens’ ERA before the alleged use of performance-enhancing drugs and dataset 2 is his ERA after alleged use. For this specific application the hypothesis can be stated:

Calculating The Probability of a Type I Error

To calculate the probability of a Type I Error, we calculate the t Statistic using the formula below and then look this up in a t distribution table.

If the datasets that are being compared have a great deal of variation, then the difference in averages doesn’t carry as much weight. For example, let’s look at two hypothetical pitchers’ data below.

The difference in the means is the “signal” and the amount of variation or range is a way to measure “noise”. The greater the signal, the more likely there is a shift in the mean. The lower the noise, the easier it is to see the shift in the mean. The t-Statistic is a formal way to quantify this ratio of signal to noise. The actual equation used in the t-Test is below and uses a more formal way to define noise (instead of just the range). The theory behind this is beyond the scope of this article but the intent is the same. The larger the signal and lower the noise the greater the chance the mean has truly changed and the larger t will become.

Roger Clemens’ ERA data for his Before and After alleged performance-enhancing drug use is below. At the bottom is the calculation of t. You can also download the Excel workbook with the data here. 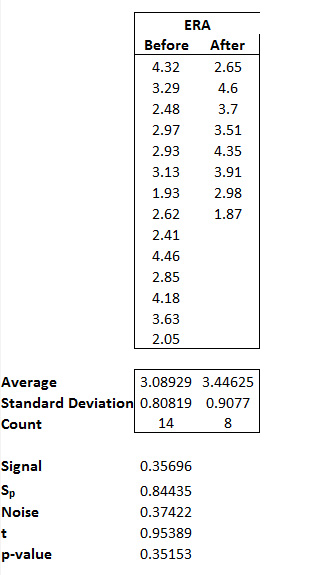 The t statistic for the average ERA before and after is approximately .95. The last step in the process is to calculate the probability of a Type I error (chances of getting it wrong). Most statistical software and industry in general refers to this a “p-value”.

The probability of committing a Type I error (chances of getting it wrong) is commonly referred to as p-value by statistical software.

A famous statistician named William Gosset was the first to determine a way to calculate the probability of Type I error (p-value) from a t statistic. His work is commonly referred to as the t-Distribution and is so commonly used that it is built into Microsoft Excel as a worksheet function. The Excel function “TDist” returns a p-value for the t-distribution. The syntax for the Excel function is “=TDist(x, degrees of freedom, Number of tails)” where…

The calculated p-value of .35153 is the probability of committing a Type I Error (chance of getting it wrong). A p-value of .35 is a high probability of making a mistake, so we can not conclude that the averages are different and would fall back to the null hypothesis that Mr. Clemens’ average ERAs before and after are the same. As an exercise, try calculating the p-values for Mr. HotandCold and Mr. Consistent; you should get .524 and .000000000004973 respectively.

The results from statistical software should make the statistics easy to understand. For example, the output from Quantum XL is shown below. The hypothesis tested indicates that there is “Insufficient Evidence” to conclude that the means of “Before” and “After” are different. 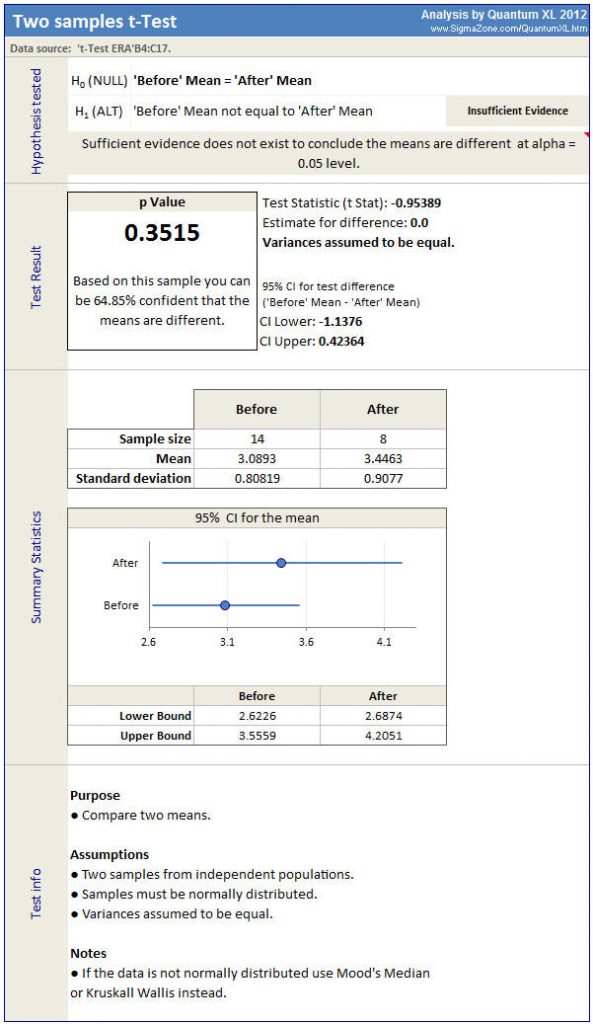 3 thoughts on “Calculating Type I Probability”